The 5 World's Billionaires: Who Are They? 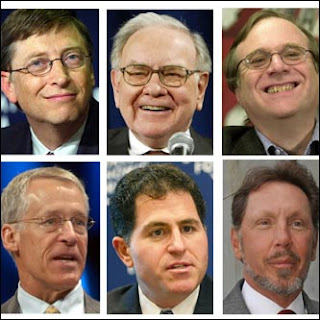 According to Forbes, the list of billionaires across the globe now boasts 1,426 names, with an aggregate net worth of $5.4 trillion, up from $4.6 trillion. About 210 new billionaires joined the club this year only! The U.S. leads the list with 442 billionaires, followed by Asia-Pacific with 386, Europe with 366, the Americas with 129 and the Middle East & Africa with 103; totaling to 1,426 billionaires in the world.
From economic point of view, increasing asset prices are the driving force behind the rising wealth of the billionaires  around the world. Many newcomers are from the fashion/retail/clothing industries;  thanks to ardent consumers like you and I who spend a lot of money clothing.

Meanwhile, DIJI NEWS is only interested in presenting the top 5 wealthiest people on the planet, according to Forbes; for your reading pleasure. DIJI NEWS hopes that the contents herein are informative, resourceful and interesting to our visitors. Below is a list of the 5 wealthiest people in the world!


1. Carlos Slim Helu: March 2013 Net Worth $73 Billion
Carlos Slim Helu is the world's richest man for the fourth year in a row. Mexico's Slim made $4 billion more this year than he did last year.  Slim is a Mexican business magnate, investor, and philanthropist who has been ranked by Forbes as the richest person in the world since 2010.  The 73 year-old Slim has extensive holdings in different Mexican companies through his conglomerate, Grupo Carso industrial and retail agent.as well as his financial arm,Grupo Financiero Inbursa. These and more have amassed tremendous interests in the fields of communications, technology, retailing and finance. He is presently the chairman and CEO of telecommunications companies Telemex and America Movil; which in 2010 was Latin America's largest mobile-phone carrier, accounted for around $49 billion of Slim's wealth by the end of 2010. As of March 2013,  the 73-year-old Slim  is worth $73 billion. Wow, 73 years old with $73 billion in his pocket -- now you do the calculation!

2. Bill Gates: March 2013 Net Worth $67 Billion
His full name is William Henry Bill Gates III, but popularly known as Bill Gates. Mr. Gates needs no introduction as far the computing world is concerned. But more succinctly, Gates is an American programmer, inventor, business mogul and philanthropist. He is the former CEO and current chairman of Microsoft, the world's largest personal-computer software company, which he co-founded with his buddy Paul Allen. One good thing about Bill Gates is that he invests a lot of his fortune in the eradication of deadly diseases like polio and malaria. According to Forbes, Gates has already given more than $28 billion to aid the project. Most of Gates' fortune is generated from private equity, bonds, and stocks. It's important to keep in mind that Gates has  5% worth of stock in Microsoft, perhaps his 2013 net worth of $67 billion, a $6 billion increase from last year, didn't come from Microsoft. Although rumor has it that Carlos Slim is at the verge of dropping to #2 spot before this year runs out; if that happens Bill Gates is likely to climb to the #1 spot, once again. Fingers crossed?

3. Amancio Ortega - March 2013 Net Worth $57 Billion
The name may be strange to a few but those in the fashion industry probably know Ortega than the whole universe knows Barack Obama as U.S President! Amancio Ortega is a Spanish fashion executive and founding chairman of the Inditex fashion group, best known for its ZARA brand. Although he's stepped down as the chairman of the company since 2011, but Ortega still owns nearly 60% of its shares. And in case you were wondering why Warren Buffet's name hasn't shown up yet, well Ortega came in at #3 as 2013 biggest gainer, whose net worth jumped $19.5 billion from 2012. According to market analysis, this number will continue to increase as long as ZARA's year-over-year net profits from global sales continue to maintain its competitive position in the retail industry. Having stepped down as the chairman, Ortega is not splashing his fortune on strippers and exotic automobiles like Birdman (lol), rather Ortega is investing his fortune in real estate. Ortega is know to have a handful of real estate properties across the global, estimated to be worth $4 billion. Among his properties is the iconic Torre Picasso, a 43-story skyscraper in Madrid Spain which he purchased from billionaire Esther Koplowiyz in 2011.

4. Warren Buffett: March 2013 Net worth $53.5 Billion
When you think of Warren Edward Buffett or simply Warren Buffett, another name that comes to your mind is Bill Gates, right? Buffett is also as an American investor, business magnate, and philanthropist. He is the primary shareholder, chairman and CEO of Berkshire Hathaway; a struggling textile company in which Buffet invested his hard earned money on back in 1962. Buffet once called Berkshire "the dumbest stock he ever bought, but the firm has long since shed its textile assets and today serves as Buffet's famed investment vehicle.  Although Buffet was once ranked as the world's wealthiest person in 2008, but his February 2013 negotiation with Brazilian billionaire Jorge Paulo Lemann's 3G Capital to snap up iconic ketchup maker H.J. Heinz Co. for $23.2 billion might bring him back to the #1 spot. Apart from accumulating wealth, the 82-year-old Buffett is also busy expanding his philanthropy. According to Forbes, in July 2012 alone, Buffett donated $1.5 billion to the Gates Foundation; bringing his lifetime giving to nearly $17.3 billion. As of March 2013, his net worth is estimated  at $53.5 billion. However, this is the first year since 2000 that Warren Buffet has not been among the top 3.

5. Larry Ellison: March 2013 Net worth $43 Billion
Lawrence Joseph Larry Ellison or just 'Larry Ellison' is an American business mogul, co-founder and CEO of Oracle Corporation, one of the world's leading enterprise software companies in the industry. Ellison is currently (as of 2012) the  third wealthiest person in America. Historically, he is known to have dropped out of the two universities he attended in America, but today, he is making billions of dollars! His fortunate can be attributed to his 22.5% stocks in Oracle. But more recently, Forbes reports that Ellison has been investing heavily in the real estate business. As reported in June 2012, Larry bought 98% of the Hawaiian island of Lanai from David Murdock for $500 million or more. He's also active in the Los Angeles mansion market. In fact rumor has it that Ellison, a big admirer of NBA basket franchises, might be purchasing the Sacramento Kings to prevent it from going to Seattle.  Ellison also has a charitable heart like the aforementioned billionaires. According to Forbes, he has donated about $445 million, mostly via Oracle stock, to his Ellison Foundation, which supports research on aging and age-related diseases. As of March 2013, his net worth is estimated at $43 billion.
Conclusively, Amancio Ortega is this year’s biggest gainer, adding $19.5 billion to his fortune in one year, knocking Warren Buffett to the #4 spot.  The year’s biggest loser is Brazilian Eike Batista, whose fortune dropped by $19.4 billion. He is now the 100th wealthiest in the world,  dropping from the 7th spot from last year!